In 1913, KDR expanded to the campus of Cornell University in Ithaca, New York. Harold A. Severy, Alpha ’09, a graduate student at Cornell, led the efforts to establish the Beta Chapter on May 24, 1913. He was able to recruit 23 members that shared the high ideals of the men at Middlebury.The 23 original members of Beta Chapter had a fine reputation that impressed the president of the New York State College for Teachers in Albany, New York. Until 1915, the New York State College for Teachers did not accept fraternities, but that changed when the Beta Chapter succeed in establishing the Gamma Chapter on June 10, 1915. 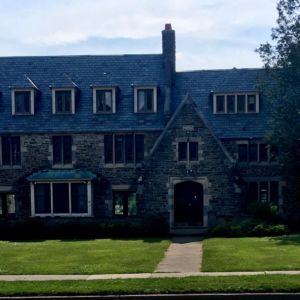 Soon thereafter, John F. Hough, Alpha ’14, a Middlebury graduate, moved to Colgate University in Hamilton, New York to do his graduate work. His dedication resulted in the establishment of the Delta Chapter on February 22, 1917. The new chapter enlisted the help of a faculty advisor, Dr. Frank C. Ewart. Dr. Ewart later became an honorary Brother and the National President, agreeing to join after previously refusing invitations to join any fraternity.

He stated, “If character building is the principle job of this Fraternity, it is probably different from the general run of them, and if here is a group of men that are banded together to carry on these ideals, I would like to help them.”

Dr. Ewart helped the Delta Chapter purchase a house that he sustained during WWI, and later helped create the National Fraternity. He emphasized, “Our job is essentially a missionary one. So far as our own membership is concerned, it is one of character building, but it must not stop with us. We aim to seek the highest interest of our country also, and one concrete way in which we can do this is to establish other Kappa Delta Rho groups in other institutions, which shall foster and propagate these ideals in those communities.”