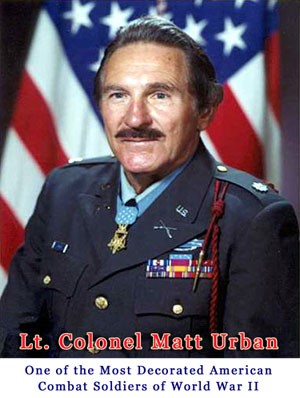 During WWII, the Brotherhood served with distinction defending our country. One shining example was Lieutenant Colonel Matt Louis Urban, who received the Ordo Honoris posthumously in 2009. Brother Urban attended Cornell University, receiving degrees in history and government, and pledged as a member of the Beta Chapter. He served as a U.S. Army officer with distinction and was belatedly awarded the Medal of Honor in 1980 for repeated acts of heroism in combat in 1944. Until recently, Brother Urban was the most decorated American serviceman according to the Guinness Book of World Records. An excerpt of Brother Urban’s Medal of Honor citation reads: “Lieutenant Colonel (then Captain) Matt Urban, 112-22-2414, United States Army, who distinguished himself by a series of bold, heroic actions, exemplified by singularly outstanding combat leadership, personal bravery, and tenacious devotion to duty, during the period June 14-September 3, 1944, while assigned to the 2d Battalion, 60th Infantry Regiment, 9th Infantry Division.”

The Quill & Scroll continued publication during the war, but the attempt to send copies overseas to Brothers in the Armed Forces failed in most cases. KDR decided to send the magazine to the Brothers’ homes in hopes their families would be able to reach them, and the effort succeeded. Soon the Quill & Scroll had letters from the war fronts. Brothers in the Armed Forces particularly cherished KDR at this time of their lives. The magazine provided addresses of Brothers overseas that resulted in reunions on the battlefields between Brothers and Chapters.

70 KDR men lost their lives during the war, and the Quill & Scroll published a memorial issue in June of 1946. An excerpt stated, “Honor Super Omnia was their motto; they knew it well in their undergraduate days; they carried it to the enemy and taught him the meaning of it. They also taught us the meaning of the phrase that sometimes becomes trite with the passing of time.” Later, in October of 1946, George E. Shaw, Alpha ‘10, published for the first time the nationally recognized Credo, in the Quill & Scroll.


This past academic year 458 Undergraduates became members of the Order of Constantine (3.24 GPA or higher).