Before 1905, only three fraternities existed at Middlebury College in Middlebury, Vermont. They included Chi Psi, Delta Kappa Epsilon, and Delta Upsilon, all founded before the Civil War. There was also a large, neutral group of men not associated with the fraternities known as the Commons Club, but its size wasn’t conducive to intimate relationships. George E. Kimball, president of the Commons Club, and two other members, Irving T. Coates and John Beecher, decided they would meet in Room 14 of Old Painter Hall in the fall of 1904. They discussed the formation of a new, more closely knit fraternity group, with the primary focus being promotion of fellowship among members and the advancement of truth, justice, and virtue.

After several meetings, they approached other members of the Commons Club who were very enthusiastic about the idea: Thomas H. Bartley, Pierce W. Darrow, Benjamin E. Farr, Gideon R. Norton, Gino A. Ratti, Chester M. Walch, and Roy D. Wood. On May 17, 1905, the 10 men met as the charter members of Kappa Delta Rho Fraternity in Room 14 of Old Painter Hall. Later, as new chapters were formed, they became known as the Alpha Chapter of the Kappa Delta Rho Fraternity.

KDR was announced at a faculty meeting in the fall of 1905. Remarks by the faculty indicated they thought KDR would have a “hard row,” or struggle to exist. However, it wasn’t long until the faculty hoped KDR wouldn’t pledge all the best men on campus.

The naysayers didn’t discourage the men. Kimball, Walch, and Ratti continued to meet, drafting a ritual, choosing a motto, and writing a constitution that defined the Fraternity’s ideas and ideals. Collectively, the men decided to name their officers after Roman titles, emulating stern Roman values, instead of the usual Greek Republic titles that most fraternities used. The first offices of KDR created were Consul, Senior Tribune, Junior Tribune, Praetor, Quaestor, and three Senators. The executive committee consisted of the consul as president and the two tribunes as vice presidents.
Their job was to oversee the operations and direction of the Fraternity. The Praetor’s role was that of secretary and he was to keep a record of what transpired at each meeting, while the Quaestor’s role was that of treasurer. The three Senators were to be alumni serving as advisors to the executive committee. Later, they added the positions of Pontifex as the Fraternity Chaplain, a Censorial Committee to monitor membership conduct, and Centurion as the doorkeeper.

The motto became “Honor Super Omnia,” which translates to “Honor Above All Things.” Middlebury blue and Princeton orange became the Fraternity colors, symbolizing justice and freedom. Since he had experience in the arts, the Founders appointed Geno A. Ratti to design the Fraternity’s coat of arms. Next, the Founders turned their attention to developing a ritual. They wanted to be sure the ritual would reflect the high ideals they strived after. With only a few revisions, their ritual’s basic principles have remained unchanged. Subsequently, the red rose was adopted as the Fraternity’s flower and has become the symbol of love and incorruption for Kappa Delta Rho. 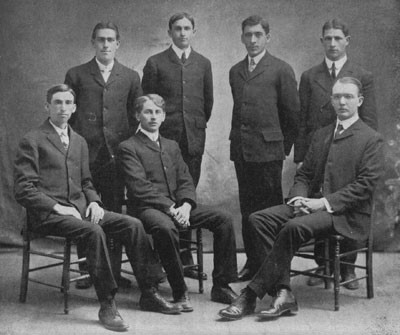 The first recorded meeting of Kappa Delta Rho was held on Saturday, September 30, 1905. Members approved the constitution, elected the first officers, and decided on a few amendments. Amendments included a regular meeting time, which they decided would be Monday evenings at 7:00 p.m. Initiation dues would be $3, then membership would be $1 a month due at the first regular meeting of each month. Another amendment was the addition of the Pontifex as Chaplain. The first few meetings were primarily used to make amendments and iron out the fine details of the Fraternity. During the early years of the Fraternity, members sat in class and alphabetical order. The Centurion went around the room, starting with the consul, receiving the grip and password from everyone. Members sang the Fraternity song, and the Pontifex led a prayer. The consul gave his report, there was an update on a committee’s progress, and then someone would suggest a cause for the men to undertake. Brief committees formed consisting of two or three brothers to accomplish simple goals. For example, a piano committee formed to get a piano for the house, a boat committee was charged with the upkeep and painting of the fraternity boat, and the book-house committee obtained a book-house. Donations to certain collegiate activities were also suggested. The only concrete goal was to enhance the collegiate experience while duly providing a service to the university. At the adjournment of most meetings, the men enjoyed debates, reading literature, or sharing light refreshments as a Brotherhood. Kappa Delta Rho almost didn’t make it past its inaugural year. During its first year, the Founders considered the idea of joining a national fraternity. Delta Tau Delta sent a representative to the campus to discuss absorbing KDR into their fraternity. 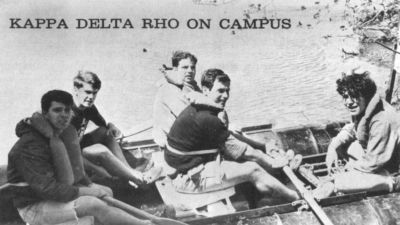 In the words of Kimball, “We decided that we preferred to ‘paddle our own canoe’ and took no further action in the matter.” Subsequently, the Fraternity decided to add an amendment to the constitution stating that they would never join another fraternity unless there was a two-thirds vote to do so by all members.

The following fall, the new Fraternity suffered a severe blow when Beecher and Coates did not return to Middlebury. The Chapter was able to recover, however, with a great deal of help from Henry Harvey, a faculty member. Henry later became the first honorary member of the Fraternity. The first initiate member of Kappa Delta Rho was Roy M. Spooner, ’08, inducted in the fall of 1905. George E. Shaw, ’10, previously thought to be the first pledge of the fraternity in 1906, was actually a member of the second KDR delegation. In the beginning stages of the Fraternity, there were no pledge classes, only delegations. Delegations were comprised of about a half dozen men called “initiate members.” To become an initiate member, one needed to be backed by a current member and seconded by another. The potential initiate member was then voted on and would be admitted if he didn’t receive a “blackball.” Later when the membership became larger, the rule was changed to two “blackballs” for rejection. During the summer of 1909, the Chapter published the first issue of the Scroll, which circulated 30 copies for all undergraduates, alumni, and honorary members. Due to conflict over the name, the publication later became the Quill & Scroll, which is still the official title of KDR’s semi-annual Fraternity magazine. From a 1910 issue of the Quill & Scroll, one can get an idea of what kind of social life the early Brothers of KDR enjoyed. On April 23, 1910, they held a “social evening” in the frat rooms, a change from the usual card party and dance. The evening began with a farce entitled “An Economical Boomerang,” lasting about a half hour. Brother Davison then gave a reading entitled “The Fourth at Mellenville.” Dancing and refreshments followed until 11:30 p.m.

Another annual event in the early years was the Frat Ride. Following exams, the Brothers and their dates traveled to Silver Lake to spend the day. In the evening, they returned by train and danced until midnight.

There was a close association between alumni and undergraduates. Alumni frequently outnumbered the undergraduates at the Frat Ride and at the Initiation Banquet held each fall. The Chapter held the banquet at the Brandon Inn, several miles from Middlebury. The Fraternity colors decorated the rooms and roses adorned the walls and tables. The evening consisted of entertainment by the Brothers, reading letters from alumni, and toasts from seniors and alumni.

At the beginning of the Fraternity, a large part of the social life of our Organization centered on music. The first edition of the Kappa Delta Rho songbook was published in 1923 and dedicated to Dr. Frank Ewart, founder of the Epsilon Chapter at Franklin College. 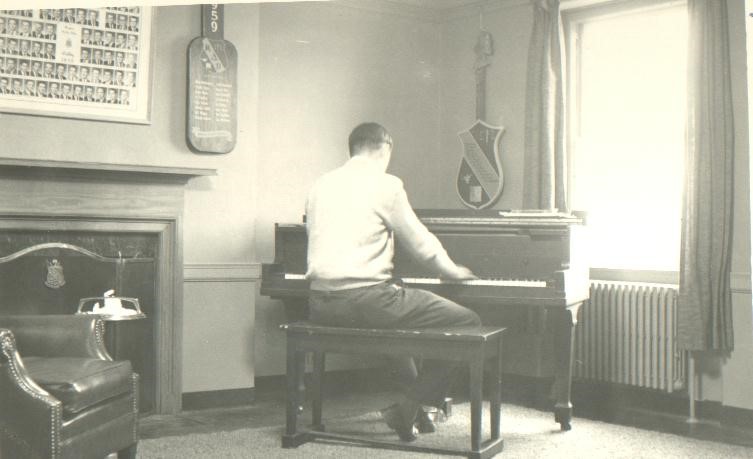 By today’s standards, these events would be considered mild, and the traditional activities are no longer the same. The early fun of KDR happened within a framework of self-discipline. The Founders’ primary aim was to attain true standards of manhood and brotherly love. These were not merely high-sounding ideals, but guidelines for life. The “plain virtues” of unpretentiousness, sincerity, and humility culminated in a high regard for each other’s welfare. Living these ideals was the test of manhood. The motto, Honor Above All Things, helped with their success. The early members had four criteria for membership: (1) membership is not an occasion for snobbishness or preference; (2) personal censorship of speech; (3) loyalty to college, church, and fraternity; and (4) abstinence from alcohol and tobacco. It was the hope of the Fraternity that its worth may ever be shown by the lives of its individual members, and that the values of the motto would promote truth, justice, and virtue.

The Founders realized that KDR would rise to higher ideals or fall by satisfaction with the status quo. With expansion occurring, the Alpha Chapter evolved into the “Parent Fraternity,” or National Fraternity. Amendments to the constitution required new Chapters to apply to the parent Fraternity to be accepted. All alumni and members submitted their vote to the Praetor. If three-fourths voted in favor of the Chapter, they were admitted. Later, after new Chapters had been admitted, they too would be presented the applications and would be able to submit their votes to the Alpha Chapter’s Praetor. New Chapters were granted the ability to create their own local constitution, but it had to coincide with the Alpha Chapter’s.